Salmon Funeral Home takes great pride in its reputation of being a leading funeral service provider in Rome and the North Georgia area. We are dedicated to ensure that each funeral reflects the unique life of the deceased and, at the same time, is meaningful for those left behind. We offer many options in your arrangements so that we may better suit you and your family and take care of all the details for you.

At Salmon Funeral Home our staff have many years of experience caring for family’s at the most difficult time of their lives. Our goal is to assist the family of a fitting tribute to their loved ones and to offer families the choice of traditional funeral services, cremations, and other options that meet the family’s needs. Please call 706-291-9472 if you have any questions or comments.

We take great pride in being one of Rome’s locally owned funeral homes. At Salmon Funeral Home all of our attention will be devoted to making our funeral home the best it can be in terms of satisfying the needs of our friends and neighbors in our community. We are not distracted by corporate mandates. Being locally owned means we’re more flexible and more responsive to your needs. We’re part of your community. We’re your family. We will always be here when you need us.”

You are welcome to call us at any time of the day, any day of the week, for immediate assistance. Or, visit our funeral home in person at your convenience. We also provide a wealth of information here on our web site so you can learn more from the privacy of your own home.

Working in the funeral business requires a heart to serve others, and Trey Salmon truly believes his calling is to serve and minister to local families in their time of deepest despair.

“People often ask me, ‘Why did you want to be a funeral director?’” Salmon said. “It’s not that I woke up one day and decided that’s what I wanted to do. You don’t choose funeral service, it chooses you. It’s a calling – a ministry – and it takes special people to be able to talk and counsel families at one of the hardest times in their lives.”

He started working for his family when he was in the ninth grade, but he felt like his duty was something entirely different. Salmon was offered an opportunity to work part time as a funeral service apprentice with the old Jennings Funeral Home when he was in college. He then went on to Gupton-Jones College of Funeral Service in Decatur and got his funeral director’s license. Salmon joined Good Shepherd Funeral Home in West Rome and worked as an embalmer and ran the daily operations of the business.

Since he opened his own funeral home, Salmon has not looked back and has not regretted his decision in the least.

“Being locally owned allows us to deal with each family, one on one and on a more personal level,” he said. “The families we serve, we know. They become part of our family. We have grown up with them, lived all our lives in Rome, have gone to church with them and have made connections through various other civic groups and organizations.”

Salmon already had a unique connection to the building that houses his business. At one time when his church – Sherwood Forest Baptist – was being renovated, the congregation used the chapel at the funeral home when it was Fred Talley’s.

“When we were having Sunday night services, I would ask my parents if I could ‘go to the bathroom,’ which ended up as me taking an unsupervised tour of the funeral home. So I kind of have a special connection to the building. Also, while I was growing up, my childhood home was being built at the same time the funeral home was being built and by the same person. I think God had a plan for me way back then.”

While his funeral home is still very young, it has already seen a lot of success with the amount of business he and his staff has received.

“I am very proud of how well we have done, especially being a new funeral home in a town with lots of competition in this industry.” Salmon said. “We have been very blessed. … I was scared at first, but I know that the Lord is going to continue blessing us and we will continue to grow as the community begins to hear the awesome feedback and testimonies from the families we have served so far.” 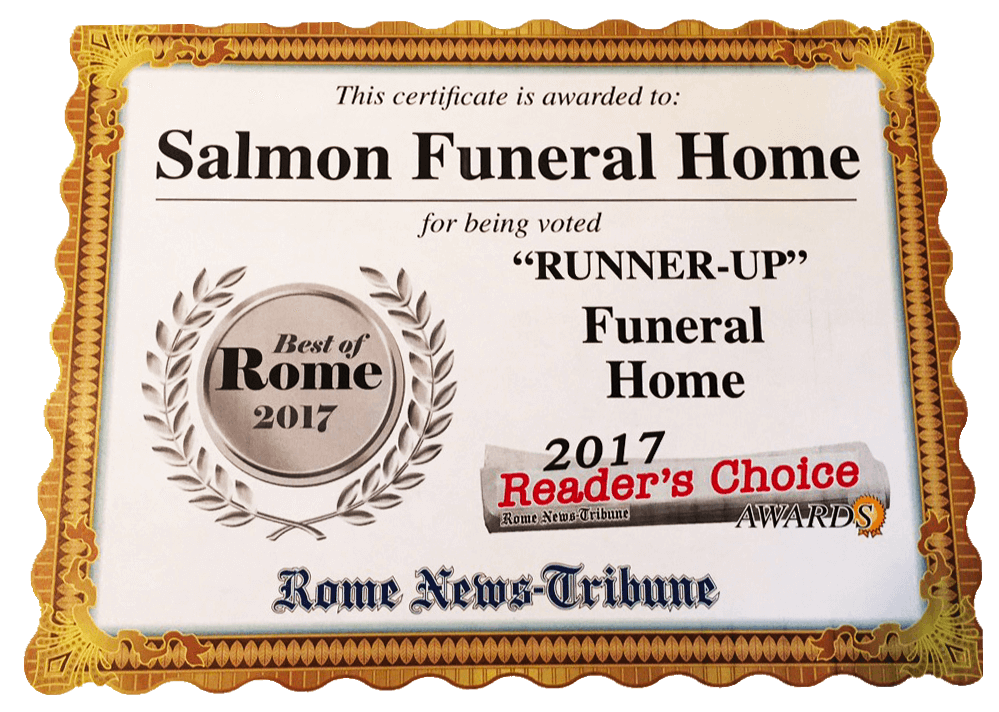